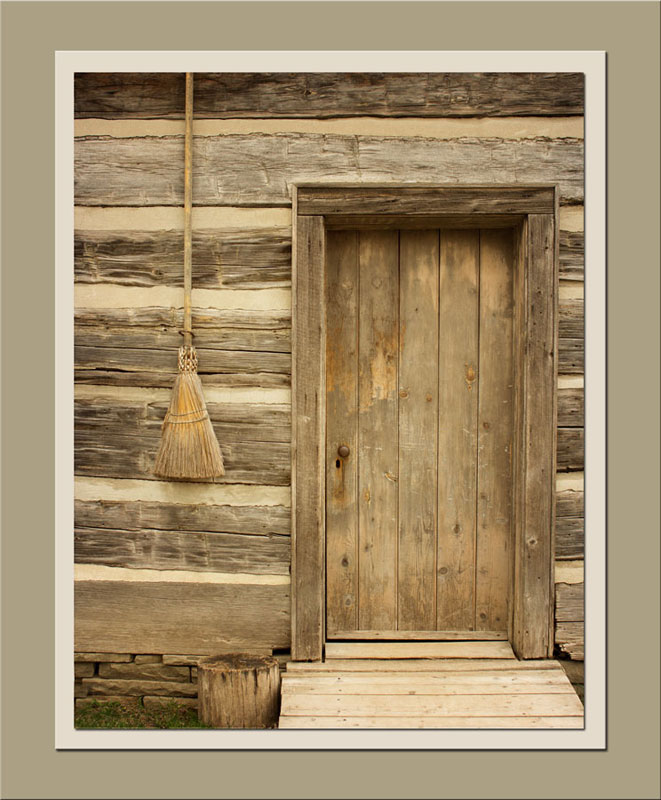 This shop is a one and a half storey squared log home built on a random stone foundation. Thought to have been the first school in the Maple area, this little building was also used as a private home. The upper level with its low ceilings is unheated and unfinished, which is now used for storage.

The main floor makes for an ideal workshop, housing the broom making equipment and living quarters. Moved to Black Creek Pioneer Village in 1963, the home was restored and opened to public in 1973.

An excerpt from Catharine Parr Traill's description of her arrival in .

The Backwoods of Canada

I was once much amused with hearing the remarks made by a very fine lady, the reluctant sharer of her husband's emigration, on seeing the son of a naval officer of some rank in the service busily employed in making an axe-handle out of a piece of rock-elm.

"I wonder that you allow George to degrade himself so," she said, addressing his father.

The captain looked up with surprise. "Degrade himself! In what manner, madam? My boy neither swears, drinks whiskey, steals, nor tells lies."

"Most assuredly I do. That pile of logs in the cart there was all cut by him after he had left study yesterday," was the reply, "I would see my boys dead before they should use an axe like common labourers."

"Idleness is the root of all evil," said the captain. "How much worse might my son be employed if he were running wild about streets with bad companions."

"You will allow this is not a country for gentlemen or ladies to live in," said the lady.

"It is the country for gentlemen that will not work and cannot live without, to starve in," replied the captain bluntly; "and for that reason I make my boys early accustom themselves to be usefully and actively employed."

"My boys shall never work like common mechanics," said the lady, indignantly.

"Then, madam, they will be good for nothing as settlers; and it is a pity you dragged them across the Atlantic."

"We were forced to come. We could not live as we had been used to do at home, or I never would have come to this horrid country."

"Having come hither you would be wise to conform to circumstances. Canada is not the place for idle folks to retrench a lost fortune in. In some parts of the country you will find most articles of provision as dear as in London, clothing much dearer, and not so good, and a bad market to choose in."

"I should like to know, then, who Canada is good for?" said she, angrily.

"It is a good country for the honest, industrious artisan. It is a fine country for the poor labourer, who, after a few years of hard toil, can sit down in his own log-house, and look abroad on his own land, and see his children well settled in life as independent freeholders. It is a grand country for the rich speculator, who can afford to lay out a large sum in purchasing land in eligible situations; for if he have any judgment, he will make a hundred per cent as interest for his money after waiting a few years. But it is a hard country for the poor gentleman, whose habits have rendered him unfit for manual labour. He brings with him a mind unfitted to his situation; and even if necessity compels him to exertion, his labour is of little value. He has a hard struggle to live. The certain expenses of wages and living are great, and he is obliged to endure many privations if he would keep within compass, and be free of debt. If he have a large family, and brings them up wisely, so as to adapt themselves early to a settler's life, why he does well for them, and soon feels the benefit on his own land; but if he is idle himself, his wife extravagant and discontented, and the children taught to despise labour, why, madam, they will soon be brought down to ruin. In short, the country is a good country for those to whom it is adapted; but if people will not conform to the doctrine of necessity and expediency, they have no business in it. It is plain Canada is not adapted to every class of people."

"It was never adapted for me or my family," said the lady, disdainfully.

"Very true," was the laconic reply; and so ended the dialogue